The Mouse Your Way Travel

The official dates have been announced for Walt Disney World’s Summer Nightastic!

If you want to see the Main Street Electrical Parade’s return to Walt Disney World, a special summer fireworks show at Magic Kingdom 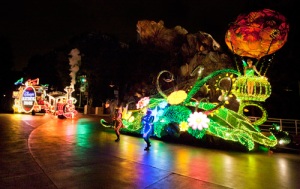 (rumored to be a new version of the popular Magic, Music and Mayhem show from Mickey’s Pirate and Princess Parties), and all of the other summer entertainment, plan your vacation for these dates.   You could even pair a Star Wars Weekend  at Disney’s Hollywood Studios with Summer Nightastic through June 14!

Don’t forget–there are two amazing discount offers for Walt Disney World resorts during the summer of 2010:

Each of these discounts must be booked by March 27th, so contact us today for quotes or to book!